One day, dear New York, I will visit you. But for now I’ll just be catching up on sleep.

Like Loading...
September 21, 2017 alizabethworley
Sometimes, it’s easy to think that if we are a woman, disabled, an ethnic minority, a religious minority, LGBTQ or otherwise part of a group often stereotyped, that we have no biases against ourselves and that nothing we do or say ever perpetuates biases or misconceptions. However, despite being a woman, I have definitely thought horrible shameful sexist thoughts like “Really? My doctor is a woman? Fancy that!” or “Wow, that man is such a good nurse! Look at him throw my bandages in the biohazardous waste receptacle!” 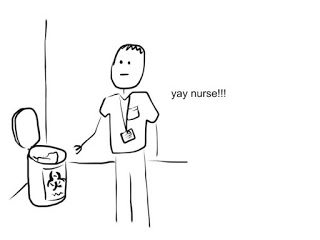 And even though my husband has Cerebral Palsy, I’ve thought despicable things about people with physical disabilities like “Oh that poor person must be so lonely and I hope they get to eat yummy meals like pancakes for dinner.” Or if I see someone pushing someone else in a wheelchair, unless they both have white hair and crinkly skin, I probably think “Wow, look at that caretaker go, and look at that other person being awake and out of bed!” Instead of, “Look at that cute couple!” even though if one day Michael is in a wheelchair and I am pushing him, I want people to think “Look at that cute couple!”

It’s not just about disability or gender or race though, it’s also just about human-being ness. I think thoughts like “Oh that person is crying they are having a bad day 😦 maybe their dog died or maybe they lost all their homework… One day they’ll know what it’s like when their baby is screaming his lungs off in his crib and they are afraid of scary possibilities of strangers sneaking into our house. One day that sad person will be sad about things like that, and then they will be really really sad, I bet they have no idea how sad, but now is probably a good time for them to be sad about things like losing their homework.” I might think this the day after sobbing because I misspelled my title on an essay I needed to turn into class. And I actually really hope I would cry if my dog died. If I had a dog. (I really really want a dog.) 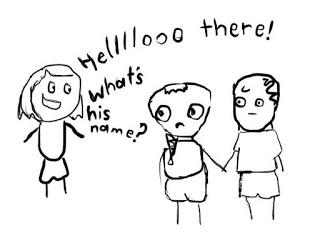 So maybe all I’m saying is that I don’t know if the people who are hurting never perpetuate negative mindsets about themselves. But that doesn’t have to be paralyzing, I hope, and it doesn’t mitigate my responsibility as someone who is fairly privileged, either. For instance, as someone who doesn’t have any sort of obvious physical disability, I am in a position to better communicate with other people who might be inclined to dismiss someone with an obvious disability.
In which case it might not be so helpful to make myself or others feel shame for having bad thoughts. Instead it might be better to simply brush those thoughts to the side and to keep getting to know more people who seem different than me or who seem similar to me but actually have deep differences and reminding myself, often, that I can be a spokesperson for so many who don’t have a voice, and that not only are people like icebergs with way more beneath the surface but that my vision isn’t very good and that I probably can’t even see all the goodness and 3-D-ness and density on the surface.

I LOVE thrift store play dates. Even when a really nice and well-meaning lady comes up to me while I sit with my baby in the toy aisle, hands me a four-page baby board book, looks at our pile of toys and says “you should consider this too. Trust me, I’m a teacher.” (She probably doesn’t know that our apartment is a fire hazard for all of the books inside.)

Usually though, everyone just assumes that everyone else is doing the best they can for their children, and the more people come, the more it is clear that we’re all in good company. 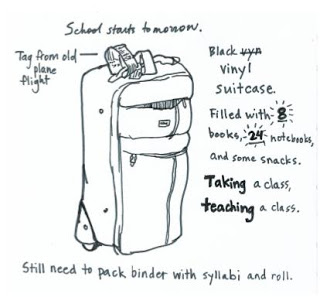 So, I *tried* packing my eight books and the twenty notebooks for my students into a backpack (not my normal one, but a hiking backpack). They fit, actually. But the weight of the backpack made me worry about herniating a disk or developing a case of scoliosis, so I went with the suitcase, which was great because then people thought I was a real hotshot who commuted to campus by plane flight or a lawyer hauling around briefs. (This picture is tardy. School started on Wednesday, and it is now Saturday night. Oh well.)

I have a happy, long overdue update... my essay, "Love and Dirt," appeared recently in a special @guernicamag issue on dirt:
@worley888
Forest after a fire.
Up the canyon.
When your two year old sits on your face and breaks your glasses... at least you get new ones 🤓
Digital drawing of my two year old baby’s ultrasound. (Not a pregnancy announcement, haha. That shop is, as they say, closed 🙂.)
A week late, but... happy birthday Harry! Also, my sister throws the best parties 😊
Our five year old said we needed a mouse, a lion, a tortoise, and a rabbit for at-home primary today :) so last night I made these.
Belated posting of pictures my dad took after Michael’s birthday get-together. Thank you, @adripdrip! @worley888
Happy 33, my dear. ❤️